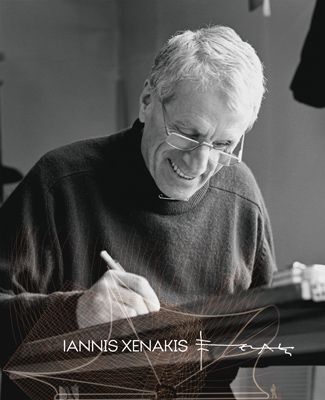 Created by Cdmc (Contemporary Music Documentation Centre) with “Les Amis de Iannis Xenakis” association, this exhibition presents the architect, composer and thinker in the intensity of his creative life, but also the man and his story so distinctive. It goes along with prestigious concert at the Théâtre of Orléans on January, 12th in 2011, bringing together the three laureates of the 9th International piano competition of Orléans and the “Percussions de Strasbourg”, especially around Xenakis pieces.

It’s hard to resume the life of Iannis Xenakis in a few words. The life of this man was so intense and unusual. He was born in Romania in 1922 in a Greek family. To understand the creator, it should be noted that this man did Engineer studies while joining against German Occupation and then British one. In 1945, a British shell hits his building and seriously hurts Xenakis, left gouged out eye, broken jawbone. After two years between studies and semi-clandestine life, he came under a fake name in France in 1947.  There, he met and worked for Le Corbusier first as an engineer and then as architect. It is not suprising when we know that Iannis Xenakis did his studies dissertation on the reinforced concrete. With it, he will create the Couvent de la Tourette in Eveux near Lyon and the Cité Radieuse of Marseille.

And music in all of this? Barely 16 years old, Iannis Xenakis took analysis, harmony and counterpoint lessons and did a geometric transcription of Bach works. In France, he was looking for a teacher to study composition, in vain, until his meeting with Olivier Messiaen. His career began and he composed while being an architect. Physics and mathematics reference is essential in his work. In 1955, he is known for “Metastasis”, a piece for 61 instruments, based on the same calculations that he used for his architectural projects. In this way he will introduce in music mass and probability notions, Set theory, Game theory and will be one of the first to use computers. At the end of his life, in 2001, he achieved his goal: combine science and art, against a backdrop of philosophy.