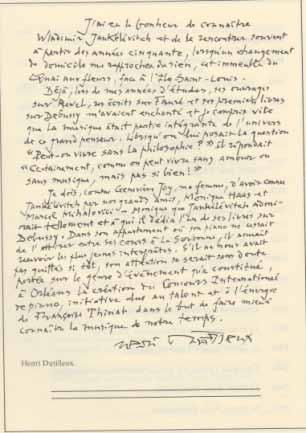 “I had the pleasure to know Vladimir Jankélévitch and to often meet him from the fifties, when a change of address made me close to him, this building at Quai aux fleurs, facing île Saint-Louis.

During my studying years, his works on Ravel, Fauré and his first books on Debussy already enchanted me and I understood that music was integral part of this great thinker world. When we asked him the question “Can we live without philosophy?” he answered “Certainly as we can live without love or music, but not so well!”

I owe a lot, as Geneviève Joy, my wife, to my dear friends Monique Haas et Marcel Mihalovici to introduce us to Jankélévitch. Monique, who Jankélévitch admired so much and dedicated one of his books on Debussy. In his appartment where his piano never stopped to attract him between his classes at the Sorbonne, he liked to receive the youngest interpreters. If he didn’t leave us so early, his attention would have been on the kind of event that is in Orléans, the creation of International piano competition, initiative due to the talent and energy of Françoise Thinat in order to better play music of our time.

Translated testimony of Henri Dutilleux on his friend philosopher

during the exhibition private viewing, 2006

Famous philosopher of morality and fundamental principles, Vladimir Jankélévitch was also a soul attentive to and a great music philosopher. He invented a philosophy able to understand the ineffable, elusive mystery of the most universal expression, also the most difficult to explain, the music’s one. His mind, his writing style, his powerful and poetic language open up to understanding of musician works he particularly loved, Mompou, Déodat de Séverac, Fauré, Debussy, Liszt, and many others, his letters and manuscripts show the friendly and sensible link between the philosopher and musicians of his time.

International piano competition of Orléans candidates will simultaneously know how to “rain little notes in lukewarm hail shower on keys” as Jankélévitch would have loved, and reawaken Spanish scents, Russian fragrances and nervous and sensual softness from Claude de France. Most of the exhibition documents are from Françoise Schwab collection, François Georges collection and Bibliothèque Mahler collection.