The candidates will be free to choose a piece among the entire work of the composer.

Candidates presenting Mana or the Cinq Danses rituelles will have to play the entire piece.

Works by André Jolivet are listed on his official website jolivet.asso.fr 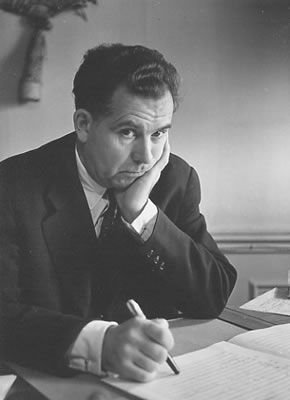 André Jolivet grew up in a family context that he dispose as far music as theatre or painting. This is also painter and baritone Georges Valmier who introduced him to Paul Le Flem with whom from 1927, he studies harmony and counterpoint. He was interested as the Renaissance as Batok’s works, Berg or  Schoenberg, he met Edgar Varèse who introduces him to his acoustic research. His discovery of North Africa allows him to further develop his knowledge of non-European music. With Mana, founding text and essential date in the field of piano repertoire, Jolivet establishes his personal language. Member of the Jeune France group (Yves Baudrier, Andre Jolivet, Daniel-Lesur, Olivier Messiaen), he participates in the common manifesto, which affirms their will to bring to the music “its spiritual violence and its generous reactions”. On January 1, 1945, Jolivet was appointed director of music at the Comédie-Française, a position he held until 1959. In his very important catalog, the piano occupies a privileged place. Creator in Aix-en-Provence of the French Center of Musical Humanism, technical advisor to the Directorate General of Arts and Letters, Jolivet is appointed in 1966 professor of composition at the National Conservatory of Music of Paris. He devotes the last two years of his life to an unfinished opera: Bogomile or the Lieutenant lost on a book by Marcel Schneider.