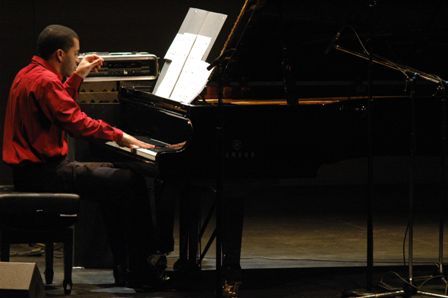 The 7th International piano competition of Orléans took place from January 30th to February 7th in 2006 and has consecrated Wilhem Latchoumia, Prodromos Symeonidis and Ermis Theodorakis as the 3 finalists of this year.

The competition was extended with a prestigious concert at the Scène Nationale d’Orléans with the Orchestre National de Lille which brought Wilhem Latchoumia to play for the first time Concerto for piano by Unsuk Chin (1998 laureate of the André Chevillion-Yvonne Bonnaud Composition Prize and 2012 member of the jury). Among the works proposed: Honegger, Messiaen, Ohana and the commissioned piece by Pierre Jodlowski, a worldwide creation played by the finalists with the support of Marina Chiche (violin), Jérôme Pernoo (cello) and Florent Héau (clarinet) to perform Clarinet Quartet composed by Paul Hindemith.

All information regarding the organisation of the rounds and contest procedures are available in the Program and Rules of the contest.

You can find the Prize List and laureates 2006 HERE

This piece finds its inspiration through the crime universe, more precisely, some of its cinematic variations. In fact, this work is made as a convergence space of fictions in which characters belong to different movies, answer to each other, maintain crossed relations. A semblance of story seems implicitly forming a path: a man disappeared, somebody’s looking for him, finding him as a conspiracy victim, trapped and separated forever from the ones who love him… Among electronic sounds, we can hear voice-over omnipresence and noises which could remind us of a film score… It’s actually the opposite, this works is imagined as a “film of musics”: each one builds visions from these sound spaces with its imaginary.

Born in Toulouse in 1971, he is a composer, performer and multimedia artist. His music, often marked by a high density, is at the crossroads of acoustic and electric sound and is characterized by dramatic and political anchor. His work as a composer led him to perform in France and abroad in most places dedicated to contemporary music aswell as others artistic fields, dance, theater, visual arts, electronic music. His work unfolds today in many areas: films, interactive installations, staging. He is defining his music as an “active process” on the physicall level [musical gestures, energy and space] and on the psychological level [relation to memory and visual dimension of sound]. In parallel to his compositions, he also performs on various scenes (experimental, jazz, electronic), solo or with other artists.
Since 1998 he is co-artistic director of éOle (research and production studios based in Odyssud – Cultural center in Blagnac) and Novelum festival in Toulouse (from 1998 to 2014).

Winner of several international competitions, he won the Prix Claude Arrieu SACEM in 2002, the Prix Hervé Dugardin SACEM in 2012, and was in residence at the Academy of the Arts of Berlin in 2003 and 2004. In 2013 he won a Prize awarded by “Academie Charles Cros” for one of his CD. In 2015 he is the winner of The Great Lyceum Prize in France for his piece “Time & Money”. From 2017 à 2019 he is resident artist in Lux – National Theater in Valence (France). Since 2019, he has become Artistic Director of Musica Electronica Nova Festival, produced by the Philharmonic in Wroclaw, Poland.