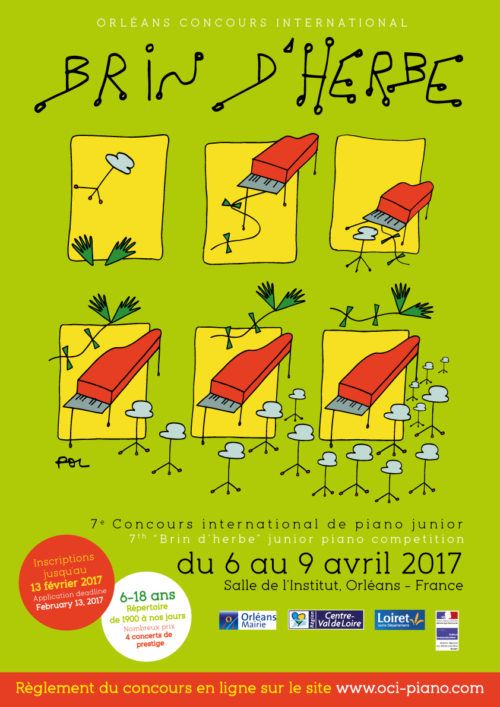 The 7th edition of the International competition of Orléans for youth « Brin d’herbe » was heald at the « Salle de l’Institut », from April 06 to 09, 2017.
The competition brought together 26 young pianists around the repertoire from 1900 to the present day. A piano and choir work entitled ‘Brins de sons’, commissioned to the composer Marc-Olivier Dupin, was premiered. The Jury, chaired by Michel Runtz, awarded 22 prizes on all three levels of competition.

You can find the Prize List and laureates 2017 HERE.

Orleans International Competition order for “Brin d’herbe” honors and delight me. As a composer essentially turned towards pluridisciplinarity – the mixing of different performing arts -, I wrote a set of several pieces on the subject of nursery rhymes. This musical genre often despised by a people too serious … includes as many wonders as a melodic plane in the invention of texts that play with language. My project was finished with pieces for piano and singing, from some notes of well-known repertoire of kindergartens and primary schools, to be sung solo or by children’s choir accompanied by a piano to support it but also facetious … This approach is as far as possible activist in my quest for gateway between music in school and special education in conservatories. Illustrious predecessors have written so-called educational pieces of music: Bach, Schumann, and closer to us Bartók, Kodály and Kurtág. I would like to dedicate them with humility and love of all the pieces I wrote for “Brin d’herbe”.