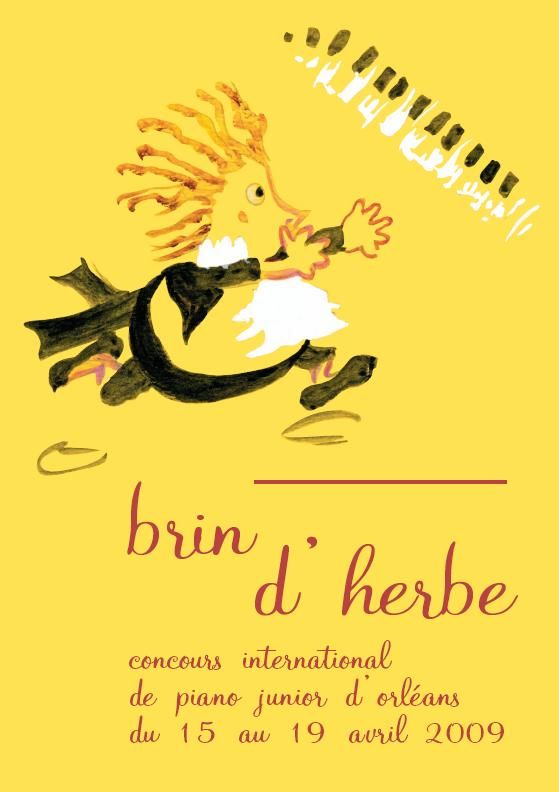 The 3rd edition of the International competition of Orléans for youth « Brin d’herbe » was heald at the « Salle de l’Institut », from April 15 to 18, 2009.
The competition brought together 20 young pianists around the repertoire from 1900 to the present day. A work for piano entitled ‘Typologies du Regard n°1 – Résonances’, ccommissioned to the composer  Pierre Jodlowski, , was premiered. The Jury, chaired by Andersen Diane, awarded  prizes on all two levels of competition

You can find the Prize List and laureates 2017 HERE.

Pierre JODLOWSKI is a composer, performer and multimedia artist. His music, often marked by a high density, is at the crossroads of acoustic and electric sound and is characterized by dramatic and political anchor. His work as a composer led him to perform in France and abroad in most places dedicated to contemporary music aswell as others artistic fields, dance, theater, visual arts, electronic music. His work unfolds today in many areas : films, interactive installations, staging. He is defining his music as an “active process” on the physicall level [musical gestures, energy and space] and on the psychological level [relation to memory and visual dimension of sound]. In parallel to his compositions, he also performs on various scenes (experimental, jazz, electronic), solo or with other artists.
Since 1998 he is co-artistic director of éOle (research and production studios based in Odyssud – Cultural center in Blagnac) and Novelum festival in Toulouse (from 1998 to 2014).

Winner of several international competitions, he won the Prix Claude Arrieu SACEM in 2002, the Prix Hervé Dugardin SACEM in 2012, and was in residence at the Academy of the Arts of Berlin in 2003 and 2004. In 2013 he won a Prize awarded by “Academie Charles Cros” for one of his CD. In 2015 he is the winner of The Great Lyceum Prize in France for his piece “Time & Money”. From 2017 à 2019 he is resident artist in Lux – National Theater in Valence (France). Since 2019, he has become Artistic Director of Musica Electronica Nova Festival, produced by the Philharmonic in Wroclaw, Poland.

His works are performed in key places devoted to contemporary sound arts in France, Europe, Canada, China, Corea, Japan and Taiwan and the United States.
His works are partly published by Editions Jobert and are the subject of several CD and video recordings on the labels éOle Records, Radio France, Kaïros, Percussions de Strasbourg. He is living in France and Poland.