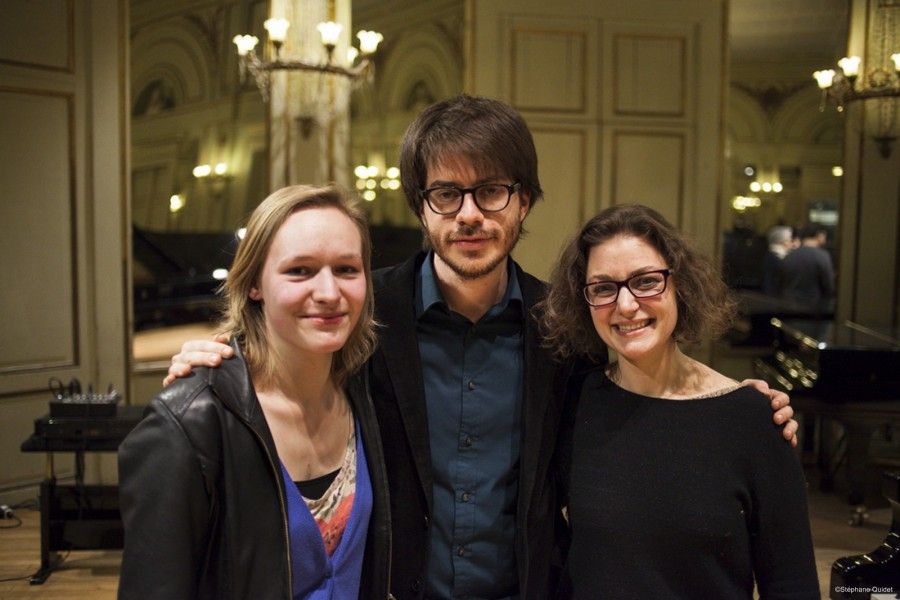 The 11th international piano competition of Orléans took place from march 5th to march 15th in 2014 and has consecrated Imri Talgam, Aline Piboule and Kathrin Isabelle Klein as the 3 finalists of this year.

The competition has ended with 3 prestigious concerts at the Théâtre des Bouffes du Nord in Paris on Monday, march 23rd and 24th. Andrew Zhou and Christopher Guzman, 2012 competition laureates presented a programme dedicated to Germanic music “Schoenberg and more” on March 23rd 2014. On Monday, march 24th 2014, 2014 competition laureates and 2013 “Brin d’Herbe” laureates have been reunited to meet the great composer György Kurtág. Among the pieces there are Boulez, Prokofiev, Albeniz, Messiaen and the commissioned piece by Jérôme Combier, a worldwide creation played by the Sacem Prize laureate with Cairn Ensemble.

You can find the Prize List and laureates 2014 HERE

Can music take into account the terrible ravages of time? Can a few moments contain the extent to which the earth is worn, how much the stones and metal are worn? Or does human music in fact rise up, always and forever, somewhat vainly, towards an origin that, though it is ideal, is also the only guarantee of its presence in the world? Lichen on a stone, to describe the image of a piano, with its brief resonances overcome by the long notes of the woodwinds and the sounds of string instruments. The image of a steadfast world – the beautiful temperament – eaten into by the microtonality that covers it. And lastly the image of virtuosity – the one of which Berio speaks, and not another – corrupted by the stasis and calm that finally absorb everything. Lichen will be a combat: that of the artist and his or her expressivity, that of the performer and his or her inner landscape. That of any art, in the end, that seeks a language.

Jérôme Combier was born on July 17, 1971 in the Paris region. He decided, at the rather advanced age of 19, to study music, and enrolled as a musicology student at the University of Saint-Denis. His Master’s degree studies, directed by Antoine Bonnet, resulted in a thesis entitled Le principe de variation chez Anton Webern. He also studied the guitar with Antonio Membrando, but it was his encounters with Hacène Larbi and Emmanuelle Nunes at the Paris Conservatoire Supérieur in 1997 that definitively caused him turn to analysis, orchestration and composition.  He also studied counterpoint at the Rueil-Malmaison Conservatory, and was a finalist in the Griegelskalpet competition in Oslo in 1995. In September 1998 he took part in a composition workshop at the Royaumont Foundation, and spent two months in Japan as part of an exchange program. Jérôme Combier won the Prix de la Vocation award from the Fondation Bleustein-Blanchet and the Pierre Cardin Prize. In 2001-02 he was selected to take an IRCAM course in composition and computer-generated music. From 2002 to 2004, with support from the Paris Conservatory, he developed pedagogical and directorial activities at the Tashkent and Almay Conservatories in Kazakstan and Uzbekistan; he spent the following year at the Villa Médicis. While there, he met Raphäel Thierry, who created the visual installations for the Vies silencieuses cycle he composed for the Cairn Ensemble, as well as the author Sylvain Coher, with whom he conceived the opera Hypothèse autour du grand amour.

In Rome, in the Sabine villages, he participated, along with the artist Xavier Noiret-Thomé, in an exhibition entitled “20 eventi”, sponsored by Guiseppe Penone. In 2002 he wrote Pays de vent for the French National Orchestra. From 2005 to 2007 he composed for the Recherche Ensemble and for the Ensemble Intercontemporain as part of the Parisian Festival d’Automne. He collaborated with Pierre Nouvel in creating the installation Noir gris for the Samuel Beckett exhibition at the Centre Georges Pompidou. Jérôme Combier’s music is published by Lemoine and has been recorded by the Motus label (Pays du vent) and by Aeon (Vies silencieuses, which won the Grand Prix de l’Académie Charles Cros). In 2008 he taught composition at the Royaumont Abbey, and also took part in the Louvre’s cycle “Le Louvre invite Pierre Boulez”. In 2008, following an invitation from the Ictus Ensemble, he made an adaptation, along with Pierre Nouvel and Bertrand Couderc, of W.G. Sebald’s novel Austerlitz. The resulting premiered at the Aix-en-Provence Festival in July 2011, and at the Lille Opera in 2011. He wrote Ruins for the Lyon’s National Orchestra in 2012, and his opera Terre et cendres, an adaptation of Atiq Rahimi’s book, was premiered by the Lyon’s Opera at the Théâtre de la Croix Rousse in March of the same year. He was also awarded the “New Talent” prize by the SACD in 2012. Jérôme Combier is the director of the Cairn Ensemble, which he founded in the late 1990s. He teaches musical and sound creation at the Ecole Nationale Supérieure in Paris-Cergy.